The Duchess of Corrnwall has revealed a secret skill as she helped serve up lunch for pensioners at a club in Hertfordshire.

Camilla, 73, has previously talked down her cooking talents, but appeared to be pretty comfortable when it came to desserts.

As she got stuck in in the kitchen alongside volunteers from the Royal Voluntary Service, she proved a dab hand at piping cream on top of the individual trifles.

She was at the club in Rickmansworth at the invitation of her pen pal Doris Winfield, who she has been writing to throughout the pandemic.

The duchess and Winfield met in person for the first time, having struck up a friendship when the royal helped with the ‘check in and chat’ programme started by the RVS.

She told her friend: “You said to me to pop in if I was ever passing, so I have!”

Rosemary shortbread. That is all.

Well, actually that’s not all that Camilla Kitchen will offer, but it’s reason enough to stop into the newly established food concept inside M. Judson Booksellers.

Camilla fills the space left empty by The Chocolate Moose, which closed at the end of August due to challenges related to operating during the coronavirus pandemic.

Camilla is the brainchild of M. Judson owners and is designed to complement not just the book shop but the roots and the why of the shop’s origins. Deep within both is a love of and for food. No just the way food tastes, but the way food brings people together, said Ashely Warlick, M. Judson’s book buyer and the person who is overseeing the menu and food production for Camilla Kitchen. 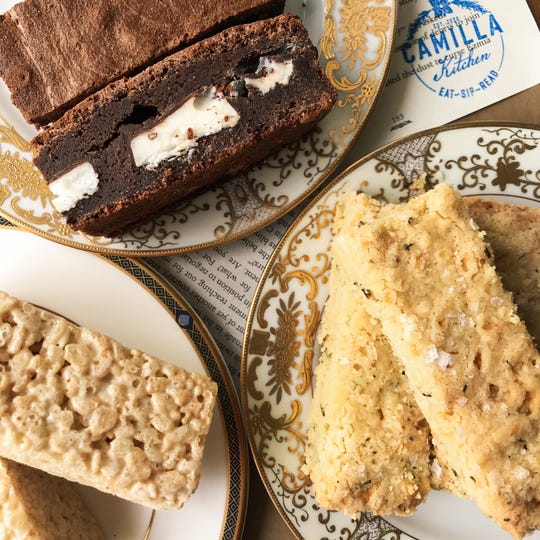 Camilla Kitchen will serve a menu of baked goods inspired by literature and cookbooks that fill shelves at M.