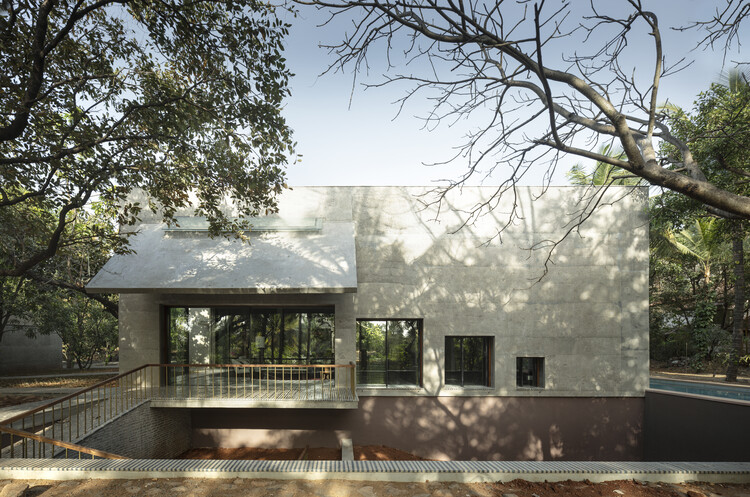 Text description provided by the architects. Every project is a response to several parameters- some physical, some metaphysical, some tangible, and some intangible. Today the idea of sustainability is imperative, but its definition has many interpretations. One such response and interpretation is this house we fondly named- House of Concrete Experiments.

Any client would be hesitant to experiment with new ideas and materials for their home, but not the owner of this house. A true patron; himself having studied at MIT, a thinking progressive mind with an attitude towards innovation and an understanding that failure is only one of the many steps to success. He understands that the environment and its care are primary that costs towards anything new is not quantified in its direct outcome, but in what it does for years ahead and that architecture is the highest form of art.

I have been blessed, not once but twice with this patron, for whom this is his second home we built; the House of Concrete experiments. To avoid being pedantic over a detailed description of the house, below are its salient features.

The House of Concrete Experiments is a residential project, located in the coastal town of Alibaug, near Mumbai. Set on the foothills of Deotalai in Zirad, the house is amidst a mango orchard.

1. At the very onset of the design, it was decided to place the house around the trees without disturbing any of them, which naturally led to a meandering fragmented form of the house.

2. An existing pit in the land on site has been made into a sunken courtyard in front of the house. Trees are grown within almost bringing the green foliage into the house.

3. The house is planned as a large studio space with just one bedroom for the couple. Two guest rooms are stacked in a separate building as an annex to the main house.

1. Walls and structures are placed so as to become sculptural elements and not on a particular grid. The house is a large column-free space, with a seamless flat concrete ceiling with no internal walls that hinder this concrete volume.

2. Three large sloping, cantilevered overhangs defy concepts of structural stability. These are meticulously designed to offer shade to the external movement around the house but also add to an otherwise flat form of the house.

3. The walls of the house range from 450mm thick to 1000mm thick. The thickness of the walls act as a natural insulator making the insides of the house much cooler than the outside.

4. The thickness also allows opportunities to use the volume of the walls to accommodate storage within, recess windows for waterproofing, and in this case the entire cooling system for the house as well.

5. An active cooling method drawing its inspiration from ancient ways of catching cool breeze into spaces, this method of air conditioning uses the thickness of the walls to its advantage, carving out small ducts within them which carry this cool air and circulate it through the large volume of the house in turn also cooling the walls in concrete.

2. The thick walls of the main house in concrete are cast with debris from the site to reduce the usage of material and render a certain rough texture when the walls are ground and finished. The debris includes stone chips, broken bricks, and at times large pieces of waste stone embedded in the walls almost like a relic.

3. The guest block is cast in pink concrete which is made by adding brick powder in it. This gives a slight blush color to the guest block against the cold grey of the main house.

4. The floors are made by recycling waste stone pieces cast in concrete terrazzo. Black kadappa, white marble, and pink marble are all used in different areas in different forms to make the flooring a large artwork. Bedroom and bathroom floors are done in small broken tile chips laid in cement that gleam and reflect the sunlight brightening up these spaces.

5. Light is a very important building material in all our work. The house has multiple playful skylights, all of the different shapes, sizes, and quirky floors, however all strategically placed to catch the light throughout the day. Sharp rays of light from these fall on the floor creating almost a peek-a-boo of various light patches and shadows throughout the entire house.

The house of concrete experiments is in fact an experiment in all its aspects, its planning, construction, structural design, material usage, the play of light and shadow, and its services. The details incorporated in the architecture and interiors of this house create continual intrigue making the otherwise overwhelming space very intimate and liveable. The house is one that cannot be photographed, but a space that needs to be encountered and experienced.