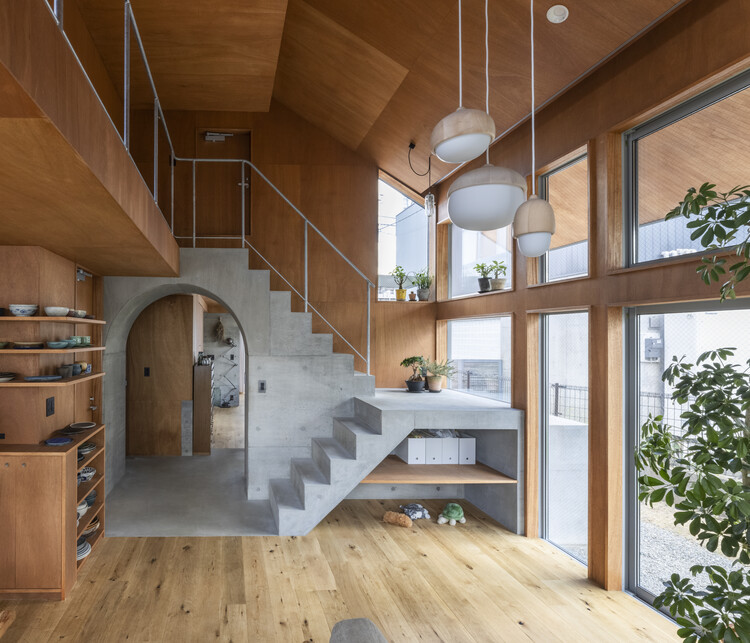 Living between the concrete as furniture. The beginning of the design was born in a conversation with the client. ” Living in a diverse that responds to time so that the entire site can be used up.” We designed a house where the concrete foundation can divide the space by standing up on the site as furniture to trigger a place to stay.

We repeated the study of the layout of the foundation, considering that it could be expanded or remodeled by using the existing foundation as a trigger, not only for supporting the timber structure as a foundation. The layout of those concrete objects was dedicated depending on the way of use such as “cooking, reading, passing through for switching the scene, etc…”

Each space is formed by fixing building roofs and walls between foundations. It is assumed that the rooms that are vaguely connected will change their function due to daily changes and changes over the years. We were also conscious of taking the indoor and outdoor spaces equally. We designated ourselves to find a way of using the spaces cleverly, instead of the architecture telling us how to use these spaces.

Understanding the strength and differences between concrete and timber material such as length of the time scale or, texture and touches. The concrete structure might keep standing there for hundred years, the timber structure part could be extended or demolished in a couple of years. The concrete part could be even used as the foundation for a new house, a playground, or a stage for performances even in the future. By establishing a long-term planning system at the foundation, we were able to create a place to live. Through this house, we were able to ponder how architecture adapts and changes due to changes in the environment and life.