“It has been my experience … that in our role to protect the environment and conserving public lands, the best way to do that is through border security,” Principal Deputy Assistant Secretary for Land and Minerals Management Casey Hammond said in a telephone interview.

“Congress has given us a lot of responsibility,” he continued. “When it declares an area a wilderness, that means the land is supposed to be ‘untrammeled.’ That’s what the law says. It’s difficult to do that when you have illegal traffic going through, and smuggling in various forms.”

Who’s in charge of BLM? 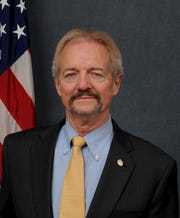 In September, a federal judge removed William Perry Pendley as the bureau’s acting director after he had served for more than a year without being confirmed by the U.S. Senate.

Yet Pendley remains at the bureau and on Monday he was listed as deputy director on its website. Pendley, a former attorney for the oil and gas industry, told the Casper Star-Tribune last week that he continues to function as BLM’s acting head but that Interior Secretary David Bernhardt will sign off on all documents.

“At the end of the day, me, Perry, any one of our many BLM employees — we all report to the Secretary of the Interior,” Hammond told the Sun-News.

For statewide and local reporting,  subscribe to the Las Cruces Sun-News today.

President Trump’s temporary appointment in 2019 made Pendley the fifth consecutive interim chief at the bureau, which manages 245 million surface acres and 700 million acres of subsurface mineral estate in the United States.

Chief district judge Brian Morris of the U.S. District Court of Montana ruled Pendley’s appointment unlawful under the Federal Vacancies Reform Act, which limits the length of time allowed for such temporary appointments.

The president has frequently named temporary leaders to key federal posts rather than make formal nominations that would be subject to confirmation hearings.

“Over the past several years, we’ve seen our land managers on our ground do an outstanding job working with our partners at the Border Patrol and that’s something that’s really encouraging to see,” Hammond said, emphasizing that BLM was an “active partner” with the federal Department of Homeland Security.

Building a wall between the United States and Mexico was a signature promise of Trump’s campaign for the presidency in 2016, along with a vow that Mexico would pay for it.

Instead, in February 2019 Trump declared a national emergency at the southern border in order to divert $3.6 billion in funds appropriated for military projects toward 11 barrier projects.

On Friday, the 9th U.S. Circuit Court of Appeals ruled the money could not be used for border wall construction, halting work on some, but not all, barrier projects in progress.

“Our role at Interior is to make sure that we are being a partner and we’re not an obstacle. We’re an ally in all of this. We’re all out to complete the mission that the president has set out for us.”

The ruling followed a lawsuit by the Sierra Club and the Southern Border Communities Coalition, which warned that construction was harmful to wildlife and communities on the border.

Hammond argued there were environmental benefits to the wall.

Laiken Jordahl, a borderlands campaigner with the Center for Biological Diversity, said border wall construction “is pushing endangered species to the brink of extinction. It is bulldozing national monuments and wilderness areas and it is inflicting damage on these sensitive wildlands that will take generations to recover.”

In the Organ Pipe Cactus National Monument near Arizona’s border with Mexico, saguaro cactus, a protected plant species, is cleared and cast aside to make way for steel bollard barriers comprising the border wall in March 2020. (Photo: Courtesy of Laiken Jordahl)

Jordahl, who has previously worked for the DOI and at BLM, said, “It has been heartbreaking to watch the Department of the Interior … abandon their mission to protect the environment and now play an active role in destroying the lands that they should be safeguarding.”

He noted, however, that conservationists’ concerns about the natural impacts of Border Patrol activity predate Trump.

“It has been heartbreaking to watch the Department of the Interior … abandon their mission to protect the environment and now play an active role in destroying the lands that they should be safeguarding.”

Jordahl has documented in photographs and video the destruction of organ pipe and saguaro cacti — two of the plant species the monument exists to protect — by construction crews building the wall.

“Those are very environmentally sensitive areas,” Jordahl said. “Those are critical jaguar habitat corridors, so it’s great that construction has been stopped there; but that’s just a fraction of where the walls have been built, and are still being built throughout the borderlands.”

But Hammond, having recently toured the Border Patrol’s El Paso Sector, said, “Our role at Interior is to make sure that we are being a partner and we’re not an obstacle. We’re an ally in all of this. We’re all out to complete the mission that the president has set out for us.”

On Oct. 6, the U.S. Government Accountability Office criticized a recent BLM program reducing royalty rates for some oil and gas leases on public lands, in response to reduced demand and plunging oil prices attributed to the COVID-19 pandemic.

The GAO report said the bureau approved reductions from 12.5 percent of revenue from oil and gas extracted under federal land leases to less than 1 percent, on average, for a period of 60 days. 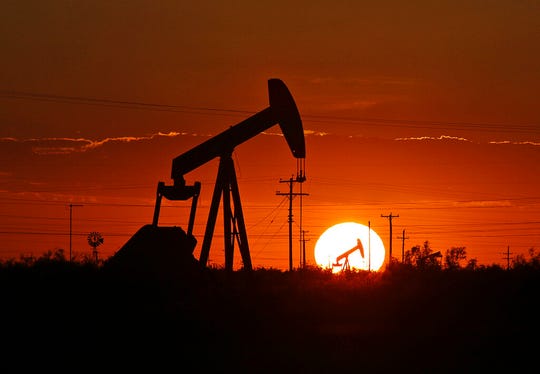 In this June 11, 2019, file photo a pump jack operates in an oil field in the Permian Basin in Texas. (Photo: Jacob Ford/AP)

The evaluation found that BLM did not assess the extent to which the relief prevented the industry from shutting down their facilities permanently or the amount of revenue lost.

Hammond said the bureau was still reviewing the GAO report but remarked that “we were very, very conservative with any relief that occurred, and I think the staff will bear out that ultimately any relief that was provided was very short term. … We stayed within existing regs and existing law, and just tried to be responsive.”

New Mexico’s state budget is historically reliant on oil and gas, with some 40 percent of general fund spending derived from billions of dollars in direct and indirect revenue from the industry, buoyed by production in the Permian Basin that straddles New Mexico and Texas.

“The president has made this a major priority, to maintain and enhance our energy independence,” Hammond said. “It’s been a tremendously exciting thing to see the technological advances that have been made in the recovery of energy resources, and you see that playing out in the Permian. As we’ve solidified our energy independence, that’s also increased our national security.”

Regarding contention over leases for extractive industries including greenhouse gas analyses that are part of the National Environmental Policy Act review process, Hammond said, “What I do is take a step back and look at the freedom that’s resulted from this energy renaissance; and New Mexico has been a major player in that.”