AUSTIN — Texas Democrats like their chances this election cycle. If you need proof, look no further than deep-red Tarrant County.

For years, it’s been the largest urban county in the state still voting Republican. In November, Democrats will compete in seven of the eight state house districts held by the GOP in the county. Democrats came within a few thousand votes of victory in five of those races in 2018.

So is the Democratic challenge real this year?

Republicans are not taking it lightly, but despite Democrats’ growing strength, GOP lawmakers remain confident they will keep Tarrant red.

“Last cycle was a wake-up call for a lot of people who perhaps have been complacent when they’ve had a challenger,” said State Rep. Craig Goldman, a four-term Republican incumbent who has a Democratic and Libertarian challenger. “I’m going to run a vigorous campaign and I know my fellow state house candidates will as well. I feel confident that we will win.”

When she took over as chair of the Tarrant County Democratic Party in 2013, Deborah Peoples said she knew there were more Democrats than were being reflected in the election results. But they weren’t engaged — and many weren’t voting.

“They didn’t vote because they didn’t feel we had a chance,” she said.

She wanted to grow the vote by expanding the number of races the party was competing in. Slowly, the party started ramping up its infrastructure and candidate recruitment.

Then came 2018. On the tails of a galvanizing U.S. Senate run by former congressman Beto O’Rourke, Democrats made huge strides. They won the county for O’Rourke, took over a seat on the county commissioners court and one justice of the peace position. More surprisingly, they gave state house Republicans some very close calls.

That got people’s attention. 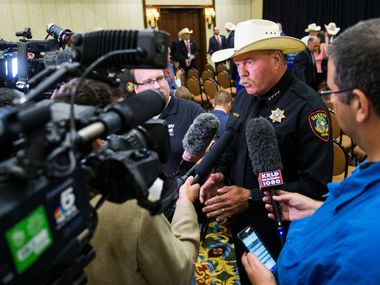 Alisa Simmons, the president of the Arlington NAACP, had long considered a run for House District 94 in southeast Tarrant but didn’t see a viable path to victory.

“I’ve always looked at this seat and just was not very confident that I could win for a variety of reasons,” she said. “I’d think, ‘I’ve got little kids, I don’t know if my job would let me.’ Maybe I was just too chicken. I found all sorts of excuses not to run.”

That changed in 2018 when the Democratic challenger to Republican incumbent Tony Tinderholt garnered 44% of the vote. That convinced Simmons she could make a serious challenge.

With significant Black and Latino populations, the district always had the demographic potential to flip, she said. The excitement from the last election has carried over, but she knows it will be a difficult road.

“This district is or has historically been conservative,” she said. “This is not going to be easy. But it’s doable.”

Luke Macias, political consultant for Tinderholt, said there’s no doubt the 2018 election gave Democrats hope. But this year, Republicans are ready for the challenge.

Tinderholt, who is also being challenged by Libertarian Jessica Pallett, is courting voters with his support for last session’s major public school finance bill. Democrats criticized Tinderholt for touting himself as a public education supporter when he previously supported private school vouchers, which they argue takes money away from public schools.

Macias said that criticism is unwarranted. Support for vouchers is a policy disagreement, he said, but Tinderholt’s vote for the school finance bill is not up for debate.

Tinderholt’s hope is that his message will resonate with independent voters, many of whom side with Republicans on issues like lower taxes and less business regulation. Recently, the campaign’s focus on support for police has played particularly well with them.

“Independent voters in Texas want to ensure that the Lone Star State does not go the way the DSA [Democratic Socialists of America] wants to take the nation and that’s why these voters are going to stay Republican,” Macias said.

But the Democrats say painting them as boogeymen won’t work.

“I’m a moderate and I think people who know me will tell you that,” said Debra Edmondson, a lawyer and former Southlake city council member who is running for House District 98, in northeast Tarrant County.

The main issue in her campaign is Austin’s encroachment on local control and she said her opponent, four-term GOP incumbent Giovanni Capriglione, is part of the problem.

“That is not a Republican or Democratic issue,” she said. “People want their cities to have the power that cities traditionally have.”

Democrat Jeff Whitfield who is running in a seat that was decided by 1,400 votes last cycle said his Republican predecessor is the real extremist.

Rep. Jonathan Stickland, a Bedford Republican and staunch conservative, decided not to seek re-election this year in House District 92, which covers Hurst, Euless and Bedford.

Whitfield said that’s because voters were fed up with him pushing ideology over kitchen table issues like jobs, schools and healthcare.

“Stickland soured people,” he said. “Republicans and Democrats alike. They’re looking for someone who will be their representative… That’s why they’re willing to give me a look.”

Macias, who also works for Jeff Cason, Whitfield’s Republican opponent, says Cason is his own man who will look out for taxpayers and business and will keep the district red.

But even incumbents like Capriglione, who won re-election in 2018 with nearly 70% of the vote, are taking their races seriously. And for good reason.

“There’s a lot of Democratic money,” he said. “We’re getting ready to see these mailers and TV ads from out of state telling people here in Tarrant County how they should vote.”

Investments from national groups are a good indication of how competitive a race is because those groups try to spend their money where they can tip the scales.

In the last month, the Mike Bloomberg-backed Everytown for Gun Safety PAC put $2.2 million towards mail and digital ads for 12 candidates including Whitfield, Simmons and Joe Drago, who is running against Republican David Cook and Libertarian Nelson Range for House District 96 in south Tarrant.

Elizabeth Beck, who is running against Goldman and Libertarian Rod Wingo in southwest Tarrant’s House District 97, has also attracted attention, raking in $163,000 in the last six-month reporting period.

Beck’s main pitch to voters is that Goldman is out of touch with his district. Beck said his opposition to expanding Medicaid goes against the wishes of his constituents. She also challenged his commitment to public education, saying he’d been tepid with his support before last session when Democrats began to make gains in the House.

“I’m offering [voters] someone they know will work for them and will listen to them,” she said. “That’s one thing I hear over and over from voters in HD 97. Craig Goldman never calls them back.” 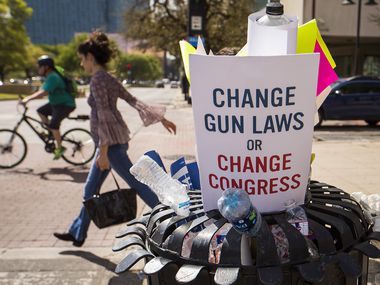 Goldman said Beck’s the one who doesn’t understand the voters. He said he listens to constituents in the district while her support comes from out-of-state Democrats including former U.S. Attorney General Eric Holder and president Barack Obama, who have endorsed her campaign.

“That will limit the amount of money going into public education,” he said. “[Voters] know that Republicans are best able to get Texas back on their feet again coming out of this financial crisis.”

Republicans are getting their own help from the national level. Lenze Morris, a spokeswoman for the Republican State Leadership Committee, said Democrats are overplaying their hand just like they did in a highly-touted special election for a vacant state house seat in January.

“We look forward to holding Tarrant County and protecting our legislative majorities in Texas,” she said.