President Donald Trump announced his first two Supreme Court nominees in the East Room of the White House, and both in prime time on a weeknight. Many people commented on the vaguely game-show suspense the former host of “The Apprentice” brought to the process: the surprising lack of leaks about the pick, the hint that two finalists might appear for the announcement that went to then-Judge Neil Gorsuch in 2017, and the president again entering the room by himself before revealing then-Judge Brett Kavanaugh as his second pick in 2018. 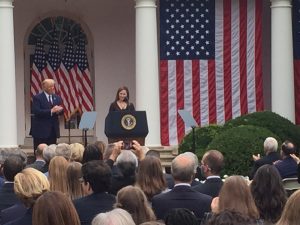 Saturday’s announcement has been set for the Rose Garden at 5 p.m., obviously not prime time and on a weekend day when big news isn’t usually announced. But the president had to consider the timing of memorials for the late Justice Ruth Bader Ginsburg, whose seat he is aiming to fill. Then there is the presidential debate on Tuesday, and the urgency of getting the ball rolling on the confirmation process with a goal of a Senate floor vote before Election Day.

When I arrive at the White House, the press office assures me the ceremony is still on for the Rose Garden, despite a threatening cloud cover and thick humidity. I think back to coming here for President Barack Obama’s 2016 Rose Garden ceremony to announce Merrick Garland for the late Justice Antonin Scalia’s seat. That was a beautifully sunny March day, but the weather couldn’t help Garland’s nomination.

Besides the weekend vibe at the White House (there are no big-name TV correspondents here) and the threatening weather, today’s event has been drained of suspense by the leaks that emerged about 24 hours earlier, when multiple news outlets reported that Judge Amy Coney Barrett, long at the top of the president’s list, will indeed be the choice.

When the press is escorted to the Rose Garden, many guests are already seated. There is some slight distance between the chairs because of COVID-19, but only a few guests are wearing masks. A military band is out on the South Lawn, playing the “Battle Hymn of the Republic” and similar martial choices.

It’s time to see who’s here. Corey Lewandowski, the president’s one-time campaign manager, had walked past the press office earlier and now is seated near the front. Gary Bauer, who served in President Ronald Reagan’s administration, led the Family Research Council, and ran for the Republican presidential nomination, is seated in the middle.

Mercedes Schlapp, a former Trump White House staff member who is now working on the president’s re-election campaign, is seated near the front. Her husband, Matthew Schlapp, the chair of the Conservative Political Action Committee, is seated farther back, next to Thomas Fitton, the president of Judicial Watch.

John Malcolm of the Heritage Foundation, who has helped draw up names for Trump’s Supreme Court lists, is here, wearing a mask. I don’t see Leonard Leo, who also helped draw up such lists when he was with the Federalist Society.

Christine Rousselle, a reporter with the Catholic News Agency, helps me identify a few other guests, including Marjorie Dannenfelser, the president of the anti-abortion group Susan B. Anthony List, and Jeanne Mancini, the president of March for Life, a similar group.

Rousselle also points out the Rev. John I. Jenkins, the president of the University of Notre Dame, where Barrett is still on the faculty even after joining the U.S. Court of Appeals for the 7th Circuit in 2017.

At the top of the hour, with the ceremony about to begin, another priest arrives. The Rev. Paul Scalia, a son of Antonin Scalia (for whom Barrett clerked in the 1998-99 term), arrives with some family members: his mother, Maureen Scalia, and his brother Eugene, the U.S. secretary of labor.

They are part of a rush of notables taking most of the empty seats near the front. Attorney General William Barr arrives. His acting U.S. solicitor general, Jeffrey Wall, is seated further back. At least five Republican members of the Senate Judiciary Committee arrive: Mike Lee of Utah, Mike Crapo of Idaho, Ben Sasse of Nebraska, Thom Tillis of North Carolina, and Josh Hawley of Missouri.

Not long after former New Jersey Gov. Chris Christie, another former Republican presidential candidate, arrives, the military band strikes up “Hail to the Chief.” It’s not for Christie, of course.

A disembodied voice announces the arrival of President Trump, first lady Melania Trump, and “Judge Amy Coney Barrett and family.” If there was an ounce of suspense left, which there wasn’t, the announcer took care of that.

The family includes the nominee’s husband, Jesse Barrett, and their seven children: Emma, Vivian, Tess, John Peter, Liam, Juliet and Benjamin. They take seats in the front row and remain quiet during the ceremony, none apparently inclined to steal the spotlight as four-year-old Jack Roberts did in 2005.

Amy Howe has SCOTUSblog’s main account of the remarks by the president and Barrett. Trump is typically methodical as he reads his prepared remarks from his teleprompter, then more animated as he ad-libs.

“Her qualifications are unsurpassed … and her record is beyond reproach,” the president says. “This should be a straightforward and prompt confirmation. It should be very easy. Good luck. It’s going to be very quick. I’m sure it’ll be extremely non-controversial. We said that the last time, didn’t we?”

Barrett pays tribute to Ginsburg, as Trump did a few minutes before. She also recognizes Scalia, her mentor.

“His judicial philosophy is mine too: A judge must apply the law as written,” Barrett says. “Judges are not policymakers, and they must be resolute in setting aside any policy views they might hold.”

She notes that the president has asked her to become the ninth justice and that she is used to being in a group of nine: her family.

“While I am a judge, I’m better known back home as a room parent, carpool driver, and birthday party planner,” she says. “When schools went remote last spring, I tried on another hat. Jesse and I became co-principals of the Barrett e-learning academy. And, yes, the list of enrolled students was a very long one.”

She acknowledges her parents, Mike and Linda Coney, and the family babysitter accompanying the brood. The rest of her remarks are not heavy on substance, but she makes the point that the Supreme Court as an institution belongs to “all of us.”

“If confirmed, I would not assume that role for the sake of those in my own circle, and certainly not for my own sake,” Barrett says. “I would assume this role to serve you. I would discharge the judicial oath, which requires me to administer justice without respect to persons, do equal right to the poor and rich, and faithfully and impartially discharge my duties under the United States Constitution.”

She closes by saying that she has “no illusions that the road ahead of me will be easy, either for the short term or the long haul.”

When she is done, Trump returns to the lectern to offer a short dissent. First, he invites the Barrett family to the riser; then he recognizes the attorney general and his chief of staff, Mark Meadows. And he again thanks the senators present.

“I know you’re going to have a busy couple of weeks,” Trump tells them, “but I think it’s going to be easier than you might think.”

With that, the president leads the first lady and the Barrett clan back into the White House.

Posted in Nomination of Amy Coney Barrett to the Supreme Court, Featured